A downloadable game for Windows

Broken Rogue is an early demo of a turn-less and grid-less roguelike where time moves when you do. Allowing free movement, it offers exciting and difficult melee combat and unique enemies.

It currently consists of four levels and a difficult end game boss. Finishing the game is a challenge.

The game seems to be broken. When I try to run the 0.8 version, I get this message:

"The procedure entry point _ZSt28__throw_bad_array_new_lengthv could not be located in the dynamic link library brokenrogue.exe"

I already tried version 0.3 and that one works, but this one fails to start.

Would it be possible to fix this?
Thanks!

It should be fixed now, sorry for the delay!

It works now and it looks good. Thanks for fixing it!

Great! What do you think about the game?

I like the “time moves when you do” idea and the simple graphics that are not just limited to ASCII, but still simple enough to allow your imagination to take over. I’ve always liked roguelike games (angband is my favourite). Both because of the intricate gameplay that comes with them, and because of the lack of detailed graphics.

I’ve finished the game once now although some luck was involved in killing the dragon. In its current state, I find that it’s difficult to use the tactical possibilities to your advantage. The ones I’ve found out are exploding zombies that kill enemies, archers shooting other enemies and dragons & demons hitting their allies. I’m not sure if there are other tactics? With the ones I’ve found, it’s quite difficult to use them in practice. Exploding zombies for instance are hard to put in the right spot, because if you want to do that, you’ll probably get killed by all the other enemies next to which you want to place them. The same goes for the archers, for which I’m under the impression that they no longer shoot the other enemies. Could that be the case? I think they still did that in v0.3, but now they don’t seem to do that anymore. I could be mistaken though. I do like the Fairy! Very useful!

Do you have future ideas for this game?

Thanks for the feedback! I agree with you and I'd like to allow more tactical gameplay as well as more interesting melee combat perhaps, because it gets a bit repetitive. My next step would be to make level generation more varied, I think. I'm not sure if/when I'll continue working on Broken Rogue though.

Hey this is pretty sick! Found this randomly on the new releases page of roguebasin. You should post it on the roguelikes subreddit!

I’d love to see more of this prototype!

Thanks for the feedback! The prototype is very rough, and before I announce it in other places I want to put more work into it, including adding graphics, improving combat, and yeah, changing the name! May I ask how far did you get in the game? Did you beat it?

I got to what I assume was the final boss, the big demon & (assuming you count the tutorial when you say there’s three floors), but I didn’t beat him. Then I stopped playing because I felt like I’d seen everything the combat had to offer.

In that case there is one more level below that has some unique enemies. 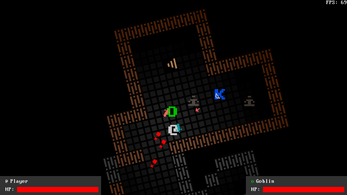 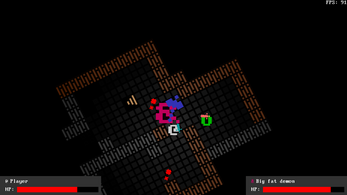 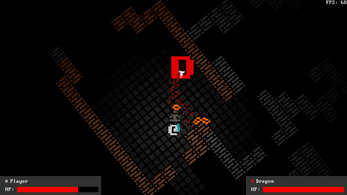